Our Runaway Rights, being released spring 2017, is for all those people who are interested, concerned or confused about our human rights and about our changing levels of security and freedom; all parents, teachers, professors, scientists, students, retirees, and all other professionals worldwide.

An American Airlines mother is allegedly struck by a stroller, tried fitting a large buggy on plane.

The other side of the coin? A woman with twins and a double stroller challenged the rights of other passengers and the policies of the airline. Her lack of sensibility and respect for others is costing an employee his job, who was pushed to act inappropriately by an intransigent and selfish mother of two. She was specifically told that her stroller was over 20 lbs. and too large to go in the plane with her. That she should check it and leave it at the gate. But she refused and caused a big scandal.

Sadly, the employee’s frustration pushed him to act in an unjustifiable manner, though he tried to do his job the best possible. Unfortunately, he lost perspective and control. Now, what is even more unfortunate is that the average person fails to see that the mother of the twins wanted to bully her way in, disrespecting company policies and threatening the safety of all other passengers. She only wanted to impose her rights selfishly, with total disregard to the system and security of others. The woman used her children as shield and started sobbing out loud in an exaggerated, pretentious manner, and completely out of control. She alienated others to the extent that an orangutan minded individual sprung up his seat and wanted to punch the airline employee. 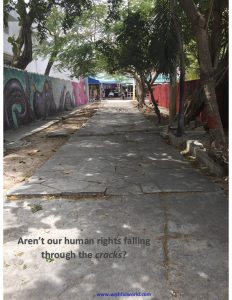 We live in a world that if you expose yourself as the victim (right or wrong), you have everything to win. You can step on other’s right with total disregard and nobody has the courage to say anything because they are afraid of being accused of intolerant, racist and coward; when in reality the person’s rights are being violated by another disrespectful individual. In this case, a mother of two playing the victim of a situation she herself provoked.

Again, I agree that the attendant reacted incorrectly and should have controlled himself and expose her for what that woman really is, a trouble maker and to some, a professional hypocrite.

But what will happen now after American Airlines publicly said: “We are deeply sorry for the pain we have caused this passenger and her family and to any other customers affected by the incident. The actions of our team member captured here do not appear to reflect patience or empathy, two values necessary for customer care. In short, we are disappointed by these actions.”

An article by TMZ (thirty mile zone) confirmed that the mother and her children were upgraded to first class on a later flight home to Argentina.

Isn’t American Airlines leaving itself open to be sued for several millions for “abusing” abusers? Sorry, I meant “abusing passengers”! … being sarcastic here.

Are the “rights” of one person righter than the safety rights of other passengers and the internal policies of companies representing us all and providing us with a professional service?

No matter our job, no matter our height, we all deserve to be treated right – The Fresh Quotes.

Learn more about Our Runaway Rights.